Navigating a New Era in International Affairs: A Conversation with Emily Haber, Germany’s Ambassador to the United States 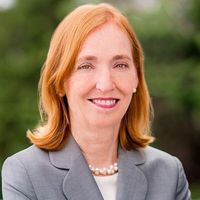 The conversation will be moderated by Dickey Center Director Daniel Benjamin.

Emily Margarethe Haber has been German Ambassador to the United States since June 2018. Immediately prior to this, Emily Haber, a career foreign service officer, was deployed to the Federal Ministry of the Interior, serving as State Secretary overseeing security and migration at the height of the refugee crisis in Europe. In this capacity, she worked closely with the US administration on topics ranging from the fight against international terrorism to global cyberattacks and cybersecurity. In 2009, she was appointed Political Director and, in 2011, State Secretary at the Foreign Office, the first woman to hold either post. Earlier in her career, she served at the German Embassy in Ankara; in Berlin, she has served as Deputy Head of the Cabinet and Parliamentary Liaison Division, as Director of the OSCE Division, and as Deputy Director-General for the Western Balkans. Emily Haber has extensive knowledge of the Soviet Union and Russia, having worked both in the Soviet Union Division at the German Foreign Office and, on various occasions, at the German Embassy in Moscow, where she served as Head of the Economic Affairs Section and Head of the Political Affairs Department.