Posted on April 08, 2022 by Office of Communications 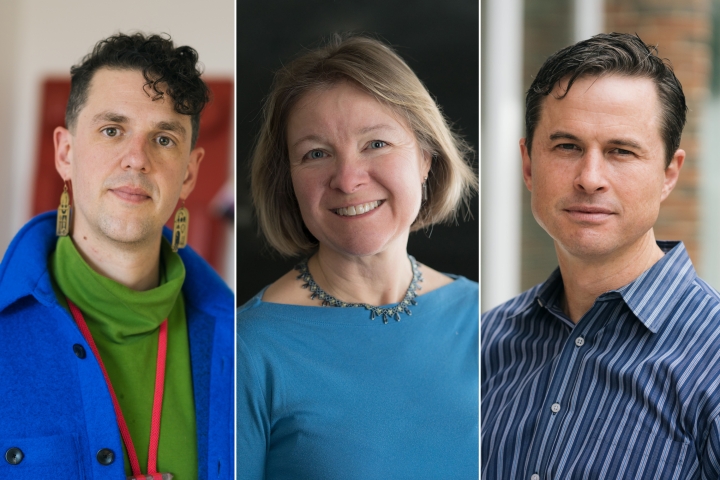 Three Dartmouth faculty members have been awarded fellowships from the John Simon Guggenheim Memorial Foundation. The prestigious fellowships provide support to outstanding scholars and artists in midcareer to allow them to pursue their work without restriction.

César Alvarez, an assistant professor of music; Brendan Nyhan, the James O. Freedman Presidential Professor and a professor of government; and Amie Thomasson, the Daniel P. Stone Professor of Intellectual and Moral Philosophy, join a cohort of 180 writers, scholars, artists, and scientists from around the country, selected from nearly 2,500 applicants.

The Guggenheim fellowship program was founded in 1925 with the declared goal of supporting “the educational, literary, artistic, and scientific power of this country.” Selected fellows receive individual grants to support the unfettered pursuit of their chosen field, according to the John Simon Guggenheim Memorial Foundation.

“I am truly delighted that the Guggenheim Foundation has recognized these three brilliant Dartmouth scholars for their innovative and creative work as well as the promise of their current research projects,” says President Philip J. Hanlon ’77, a member of the foundation’s educational advisory board and 1992 Guggenheim fellow.

César Alvarez, an assistant professor of music, is a composer, lyricist, playwright, and performance maker. They create large experimental musicals as non-normative possibility spaces for embodiment, inter-dimensionality, socio-political transformation, kinship, and coexistence. Alvarez’s fellowship will support their work in drama and performance art.

“This is an honor beyond words,” Alvarez says. “I’ve been playing music for 30 years and writing musicals for 15. All this time I’ve just been trying to put one note in front of the next, making work that speaks to me and the people around me. It is an out-of-body experience to have a piece of performance that is so personal, and still in process, recognized with this type of award.”

The fellowship will support the New York production of Alvarez’s musical The Potluck in 2024.

Of the work, Alvarez says, “In 1979 five of my parents’ best friends were murdered by Klansmen in broad daylight in Greensboro, N.C. I was born a year later and named after two of the victims, César Cauce and James Waller.”

“The Potluck attempts to heal a wound inflicted by state-sanctioned white supremacy with the queer witchcraft of musical theater. Leaving behind Marx and linear narrative, The Potluck explores the weak side of revolution and what the ghosts of ‘The 5’ want us to know about the fabric of being.”

Alvarez earlier this year was awarded the Kleban Prize for Musical Theatre, given to the most promising lyricist in American musical theater.

Brendan Nyhan, the James O. Freedman Presidential Professor and a professor of government, focuses his work on misperceptions about politics and health care as well as political communication and the media. He is a cofounder of Bright Line Watch, a watchdog group that monitors the status of American democracy, and is a blogger, media commentator, and a regular contributor to The Upshot website at The New York Times. His fellowship is awarded in the field of political science.

“I’m thrilled to have been selected. It’s an honor to be recognized as part of such a remarkable group and I’m grateful to the Guggenheim Foundation for their support,” Nyhan says.

He says the fellowship will support his work examining “the over-time effects of a digital literacy intervention on both the beliefs people express and their behavior on social media, which we will track with their permission by having them verify their ownership of their Twitter account.”

Amie Thomasson, chair of the Department of Philosophy and the Daniel P. Stone Professor of Intellectual and Moral Philosophy, specializes in metaphysics, metametaphysics, philosophy of art and literature, philosophy of mind, and phenomenology. She has also done work on artifacts, fictional characters, and social and cultural objects. Her current focus is on questions about what metaphysics, and philosophy more generally, can legitimately do, and how it can be done.

Thomasson says, “I am so honored to receive this award, and extremely grateful to have the opportunity to do some focused thinking and writing, as I work on my project, a new book tentatively entitled Rethinking Metaphysics. ”

About the Guggenheim Fellowship

Edward Hirsch, president of the Guggenheim Foundation and 1985 Fellow in Poetry says, “The work supported by the foundation will aid in our collective effort to better understand the new world we’re in, where we’ve come from, and where we’re going. It is an honor for the foundation to help the fellows carry out their visionary work.”

Faculty in all disciplines interested in applying for external funding opportunities such as the Guggenheim fellowship have access to resources through Dartmouth’s Grant Proposal Support Initiative.