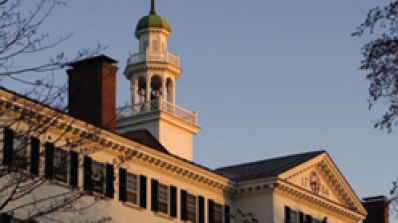 The first paper is based on a QSS research project, "Evaluations of Asian-American Political Candidates: The Effect of Ethnicity on Stereotypes,"  that he completed last summer.  The second is based on his Government honors thesis, "Tradeoff Decisions for Asian American Voters: Choosing between Co-Ethnic and Co-Partisanship Representation," an ongoing project supervised by Assistant Professor Mia Costa and Professor Yusaku Horiuchi, both of whom are in the Department of Government and serve on the QSS Steering Committee.  These two projects examine Asian Americans' political attitudes, a subject that is underinvestigated in the existing literature.  John is a co-author of a third paper, "Who stands next to whom?," presented at the Midwest conference, a study of voting lines that is co-authored with Michael Herron of Dartmouth and Daniel Smith of the University of Florida.

After graduating from Dartmouth, John, who is also a Stamps Scholar, will be a pre-doctoral fellow at Yale University, working with Professors Alan Gerber and Greg Huber.