Down to the Countryside: Chinese Youth in the Cultural Revolution--Sept 27 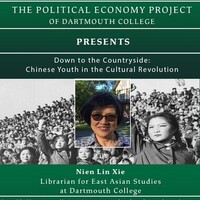 In 1968, Mao wrote, "It is very necessary for the educated youth to go to the countryside and undergo re-education by poor peasants." Between 1968 and 1978, an estimated 17 million urban youth were relocated to remote villages and border regions to work. Since 2016, Dartmouth librarian NienLin Xie, who was one of them, has been collecting original materials to document this period as it was experienced by the participants."

This event is sponsored by the Political Economy Project, and is free and open to the public.