Working for Justice in an Age of Authoritarians and Extremists 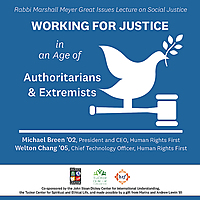 Working for Justice in an Age of Authoritarians and Extremists

Michael Breen is president and chief executive officer of Human Rights First. Established in 1978, HRF’s mission is to ensure that the US is a global leader on human rights. The organization works in the US and abroad to promote respect for human rights and the rule of law. Before joining Human Rights First, Breen served as president and CEO of the Truman National Security Project, a nationwide membership organization of diverse leaders inspired to serve in the aftermath of 9/11.

Prior to his work at the Truman Project, Breen led soldiers in combat in Iraq and Afghanistan as a U.S. Army officer, including by serving for a year as a platoon leader in the Pech and Korengal Valleys with the 173rd Airborne. After leaving the military, he served in the Office of White House Counsel and co-founded the International Refugee Assistance Project, working with refugee families in Syria, Lebanon, and Jordan.

Dr. Welton Chang is Chief Technology Officer at Human Rights First. Prior to joining Human Rights First, Welton was a senior researcher at the Johns Hopkins Applied Physics Laboratory (APL) where he led teams and developed technical solutions to address disinformation and online propaganda. Before joining APL, Welton served for nearly a decade as an intelligence officer at the Defense Intelligence Agency and in the Army, including two operational tours in Iraq and a tour in South Korea.

Co-sponsored by the John Sloan Dickey Center for International Understanding, the Tucker Center for Spiritual and Ethical Life, and made possible by a gift from Marina and Andrew Lewin ’81