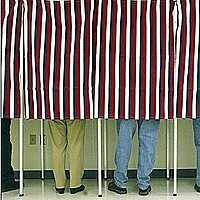 Event Info:
The 2020 election in New Hampshire has been overshadowed by the Presidential Race; however, the results of this election may impact New Hampshire politics for the next decade.  This program will examine the current “state of the race” in New Hampshire and discuss electoral implications.

Andrew Smith has been Director of the University of New Hampshire Survey Center since 1999 and is Professor of Practice in the UNH Department of Political Science. He has more than 30 years’ experience in academic survey research and is past President of the Association of Academic Survey Research Organizations and is Vice President, President Elect of the New England Chapter of the American Association for Public Opinion Research (NEAAPOR).

Professor Smith has published in multiple journals, including APSR and POQ, and is co-author with David Moore of The First Primary: New Hampshire’s Outsize Role in Presidential Nominations, published by the University Press of New Hampshire. His current research focuses on methodological issues in pre-election polling and how that impacts interpretations of survey findings.

Jennifer Jerit studies public opinion and political communication, focusing on the features of media coverage that influence how people learn about the political world. Her current research examines best practices for the measurement of public opinion through survey and experimental methods. She also is a co-editor of the third edition of the Oxford Handbook of Political Psychology. Her research has been funded by the National Science Foundation and the Economic and Social Research Council. Her work has been published in the American Political Science Review, American Journal of Political Science, Journal of Politics, Public Opinion Quarterly, Journal of Experimental Political Science, and other scholarly journals.