Dartmouth Experts Weigh In on Threats to the N.H. Primary 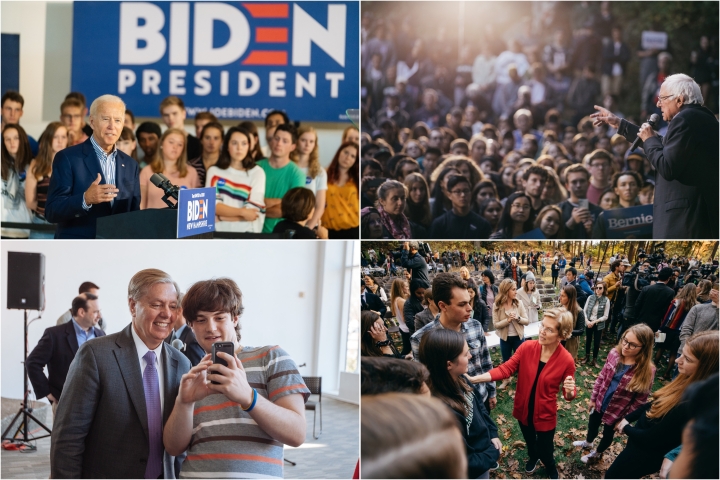 For a century, the road to the White House has passed through New Hampshire, launching or reviving insurgent and long-shot candidacies and making Dartmouth a prominent campaign stop.

But heading into the 2023-2024 presidential cycle, the state’s iconic first-in-the-nation primary faces its most serious threat yet.

Earlier this month, in a stated effort to bring more diversity to the primary process, the bylaws subcommittee of the Democratic National Committee approved President Joe Biden’s proposal to bump New Hampshire from its first primary spot, pushing South Carolina into the prime position, and calling for Nevada and New Hampshire to share the second spot a few days later.

“Absolutely, New Hampshire will hold the FITN primary in 2024,” says Kuster, who, along with the other Democrats in New Hampshire’s Congressional delegation—U.S. Sens. Jeanne Shaheen and Maggie Hassan, and Rep. Chris Pappas—will defend the place of the New Hampshire primary before the full DNC when it meets to make a final decision in February.

“Because of our state’s size, geography, and voter participation, New Hampshire is perfectly situated to host the FITN primary. Our state allows the best candidates—not those with the biggest war chest—the opportunity to break through and make a name for themselves,” Kuster says.

“I am confident that we will abide by our state’s law and keep our first-in-the-nation primary slot.”

Muirhead, the Robert Clements Professor of Democracy and Politics, was elected last month to his second term in the New Hampshire House as a Democrat representing Lyme and Hanover. He says Secretary of State David Scanlon, the hand-picked successor of longtime primary defender Bill Gardner, will certainly follow state law and schedule the Democratic and Republican primaries seven days before any similar contest, regardless of what the DNC decides.

And Republicans, led by New Hampshire Gov. Chris Sununu, are denouncing any efforts to change the state’s position in the primary calendar.

“The best argument is that the Democratic Party needs to put swing states first. New Hampshire’s a good one to have first because it’s an affordable, low cost-of-entry state,” Muirhead says.

“To put it in perspective, had Al Gore won the state of New Hampshire in the election of 2000, that election would never have gone to the Supreme Court because he would have easily won the Electoral College even without Florida,” Muirhead says.

At the same time, it is noteworthy that Biden’s candidacy, which was on the ropes after Iowa and New Hampshire, was revived in the South Carolina primary thanks to his appeal to Black voters, a core constituency for Democrats, say Lacy and Enten.

Attempts to remove New Hampshire from the top of the primary calendar go back decades, particularly on the Democratic side, says Lacy, both from individual states trying to elevate their influence, and more recently from the Democratic Party concerned that the Granite State’s overwhelmingly white, higher-income population is a liability when it comes to vetting prospective candidates.

“And I think that Joe Biden missing in New Hampshire with fifth place and then getting to South Carolina, the fourth contest, and basically clearing the way to the nomination, has made a lot of Democrats think that New Hampshire is not the best place to start,” Lacy says.

“What is the purpose of the New Hampshire primary? It’s really to winnow the field. It’s not necessarily to pick the nominees,” says Enten, senior writer and analyst for CNN Politics who rose to prominence as a data journalist for the FiveThirtyEight politics website.

The question of whether New Hampshire is succeeding at this is not clear cut, says Enten, spinning through primary results that prove and disprove New Hampshire’s impact dating back to the 1990s.

But just looking at the 2020 primary, he says, Biden came in fifth and carried on, Elizabeth Warren finished fourth and her campaign effectively ended, and Pete Buttigieg finished a close second behind Bernie Sanders, both proving and disproving the argument for New Hampshire’s winnowing function.

But Buttigieg’s strong finish proves another point, he says.

“It shows, even if you win New Hampshire, you still have to win in the states that have more than a handful of Black voters in them. Buttigieg’s problem all along was that he had no support among voters of color, particularly Black voters who were like, who the hell is this guy? He was beaten in the South Carolina primary by Tom Steyer, who nobody remembers,” Enten says.

But this battle isn’t the state’s first in defense of the FITN, and probably won’t be the last, says Lacy. Also, the DNC likely does not have the stomach to mete out political punishments when New Hampshire inevitably follows its own state law and sets its primary seven days before any other, particularly after the state’s midterm results helped Democrats hold the U.S. Senate and prevent a red wave in the House.

Shaheen, Hassan, Kuster, and Pappas seem to be banking on the DNC’s aversion to alienating supporters. They jointly wrote in a Dec. 15 Boston Globe opinion piece, “To hold a Democratic majority in the Senate, take back the House of Representatives, and keep a Democratic administration, Democrats need New Hampshire. If the Democratic Party chooses to dismiss the importance of New Hampshire going first in the primary calendar, we are tremendously concerned about the outcomes of races up and down the ticket.”

Dartmouth and the Primary

Youth activists have played an outsized role in the New Hampshire primary dating back to the campaign of Sen. Eugene McCarthy in 1968, and Dartmouth has always been a key feeder of student campaign workers. In addition, Dartmouth has hosted a total of six Republican or Democratic debates from 1984 to 2011. Over the years, scores of politically engaged students have gone on to careers as political consultants, public officials, congressional and White House aides, journalists, and public policy experts.

Enten says the New Hampshire primary was a major factor in his decision to come to Dartmouth, and that he was there for the landmark contest between Hilary Clinton and Barack Obama. Clinton’s narrow victory in New Hampshire that year sent the contest almost all the way to the Democratic Convention, where Obama went on to capture the nomination.

“I did want to take part in the political process, as a spectator or as a voter, but I think it was really a great civics lesson. You got to see the candidates up close. You got to be part of history,” Enten says.

The access to candidates was amazing, Enten says, “and on a very personal level, it was actually important to me because I met a guy at NBC News, Mark Murray, when I was up there, and that was part of the reason I got an internship at the NBC News political unit, and that started me on my way. So it was a chance to make connections.”

Kuster, whose father Malcolm McLane ’46 was a former mayor of Concord and executive councilor, and whose mother Susan McLane was a longtime state representative and state senator, also relishes the opportunities the New Hampshire primary offered her growing up in the state and attending Dartmouth.

“When I was a teenager, even before I came to Dartmouth, in 1972, I campaigned door-to-door for Pete McCloskey, who ran against President Richard Nixon as a protest to the Vietnam War,” says Kuster, whose mother was a liberal Republican. “Later, during college, the Dartmouth campus lit up with excitement around primary season—a true testament to the retail politics that New Hampshire does so well.”

Enten is confident that, no matter what happens, New Hampshire and Dartmouth will retain their great political traditions. “It is still very much at the top of the calendar, and the voters in New Hampshire will still play an important part in deciding who the nominees are in both parties.”