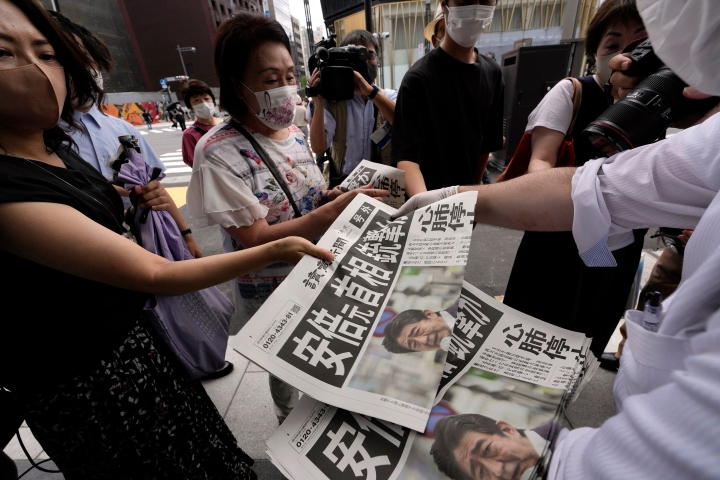 Members of the Dartmouth community reacted with shock and regret to news that former Japanese Prime Minister Shinzo Abe was killed by a gunman at a campaign stop in western Japan on Friday.

The shooter, who is in custody, used a homemade weapon to attack Abe at close range as the 67-year-old spoke outside a train station ahead of Sunday’s parliamentary elections, the Associated Press reported. The apparent political assassination was a jarring event in a country with some of the strictest gun laws in the world.

Early Friday, Jennifer Lind, an associate professor of government who specializes in Japanese studies, tweeted out, “So saddened by the news about former PM Abe. My heart goes out to our Japanese friends in their grief and shock. Abe-san was a vital partner and visionary in the US-Japan alliance. It’s hard to convey the magnitude of his contribution—of his ideas and leadership. RIP.”

Later Friday morning, Lind shared a commentary she was preparing for Chatham House, the London headquarters of the Royal Institute of International Affairs, where she is a research associate.

“With the assassination of Shinzo Abe, Japan’s longest-serving prime minister, Japan has lost one of its greatest leaders who leaves behind a powerful legacy. Domestically Abe had an ambitious agenda (known as ‘Abenomics’) to encourage economic growth, and he stood out for drawing attention and devoting energy toward more equitable treatment of women in Japanese society,” Lind writes.

But Abe leaves behind the greatest legacy in the realm of foreign policy, she says. “In the late 20th century, Abe recognized Japan’s security environment was increasingly dangerous, notably because of China’s rising power and ambitions, and North Korea’s acquisition of nuclear weapons.”

Government professor Yusaku Horiuchi, the Mitsui Professor of Japanese Studies, arrived in Tokyo Thursday, and presented a paper Friday on Japanese public opinion in reaction to security crises, shortly after the news of the assassination broke.

He tweeted from Tokyo, “The assassination is horrible. It is a sad day for Japan. But this incident may have consequences on Japan’s international relations by changing the Japanese people’s attitudes toward self-defense forces and the constitutional revision.”

Although Abe stepped down as prime minister in 2020 for health reasons, he remained a powerful voice in the Liberal Democratic Party and was a strong advocate for amending Japan’s post-war pacifist constitution and strengthening of the country’s self-defense forces, Horiuchi says. Abe was campaigning for his party’s parliamentary candidates when he was killed.

The paper Horiuchi presented in Tokyo, as the world reacted to Abe’s death, was titled “Natural Experiments of the Rally ’Round the Flag Effects Using Worldwide Surveys.” It is joint work with recent Dartmouth alumnus TaeJun Seo ’22.

Horiuchi tweeted right after the conference on Friday to discuss some possible implications of the assassination based on the existing literature and his own research projects.

One of his recent tweets points to future research that looks at the political ramifications of Abe’s death: “An interesting question (to me) is the effect of the news media’s report that the suspect is a former member of Japan’s Self Defense Force (SDF). I am working on another series of studies with Atsushi Tago and Takako Hikotani about Japanese people’s attitudes toward SDF.”

And in an email early Saturday Tokyo time, Horiuchi raised concerns about numerous unfounded social media claims that the shooter was Korean or Chinese.

“The circulation of such misinformation may also have important consequences on Japanese public opinion toward Korean, Chinese, and other minorities in Japan, which in turn may affect Japan’s relationship with neighboring countries,” he wrote.

Another shocking aspect of the story, noted by Lind and many others, is that Japan’s strict gun laws mean public violence is extremely rare.

With a population of 125 million, Japan had only 10 gun-related criminal cases last year, resulting in one death and four injuries, according to the Associated Press. Eight of those cases were gang-related. Tokyo had no gun incidents, injuries, or deaths in the same year, although 61 guns were seized.

As world leaders and all factions of Japanese politics deplore the shooting and praise Abe for his contributions to domestic and international affairs, Lind adds her own tribute at the conclusion of the piece she wrote for Chatham House.

“Abe guided Japan through this new era with vital intellectual leadership and skilled diplomacy. He strengthened Japan’s relationship with the United States—showing particular diplomatic acumen during the Trump years: a time of chaotic alliance relations, in which Abe became known as the ‘Trump whisperer.’ Abe created a vision of the ‘free and open Indo-Pacific’ that became the core of the U.S. approach toward the region.”